Congratulations Scotland, you have passed Intro to Expected Goals and are now moving

onto the advanced class. Most following me know that expected goals are the likelihood that a goal will be scored on a shot. Expected goals is now a term that more and more Scottish football fans are familiar with, understand, and can discuss coherently. Sure, there is the occasional “Yer Da” still yelling about “Goals and Points being the only stat that matters!”, but compared to three years ago, football analytics literacy has grown considerably in Scotland.

However, now that many have the basics down, we need to have a talk about expected goals. On Twitter last week, I noticed there was discussion about the usage of xG and in particular summing xG totals for individual matches and saying things like “(this team) should have scored 2 goals because they had an xG of 2.” Let me first throw myself at the mercy of the metaphorical court, I have created a few different visualizations where a summed xG total for an individual match was present. It is still on the xG maps I publish each week for the SPFL.

I chose to sum xG on the graphics I have posted to try and ease Scottish football fans into xG. With that being said, there are some issues with summing xG for individual matches. Danny Page covers the issues in an article he wrote pretty comprehensively. Danny points out that if you sum the xG, you will miss on on the variance that can occur in a single match. In his article, he says:

Arsenal won 0–3 with a xG scoreline of 0.39–1.49. In these cases, some may say “The right team won” because the xG and real life scorelines match. However, these values are only adding expected goals. But something is missing. Only adding independent probabilities misses half of the story: variance.

A good situation to think of here is a shot with an xG of 0.05. That shot may go in, it has gone in before, but it is not likely. The instances where it does go in is the variance Danny is talking about, but generally it is not a shot that is going to lead to goals often. But let’s say that a team has ten of those 0.05 xG shots, compared to a team that has one 0.50 xG shot. The second team’s shot is much more likely to go in than any of the first team’s shots, but summing the xG in this situation they would both have an xG total of 0.50.

Sometimes those lower xG shots will lead to a win, thus the idea of variance. Typically  summing xG over the course of a season variance usually will find the mean. However, anything can happen in one game. Therefore, Danny puts forth that rather than summing xG totals in a single match and making conclusions off that, it would be better to use win percentages based on the xG of each team’s shots and the likelihood of the goal difference for that match based on the xG output, so that is what we are going to do.

To do this, we will take the xG of each shot for a team in a match and run them in a Monte Carlo simulation 1000 times. This is similar to what I do to come up with the numbers for B.U.R.L.E.Y. for the season. With these simulations, we can come up with 1,000 results of matches with the xG results of a particular match and produce how many times each team would typically win and draw, what would be the most common scoreline, and the typical points per game from that xG performance. In addition to seeing the sum of the xG for a match, we will see the team that was most likely to win and what the score would typically be from a match with that xG output.

Using Danny’s xG simulator  as a template, I will now be producing these graphics for every SPFL match. Henceforth, these graphics will accompany the xG maps we have been producing each week and will hopefully give some further insight into expected goals. As this now the “advanced class”, please feel free to let me know if you have questions or comments about this!

The past few years have been a bit of a roller coaster for Motherwell Football Club. Over the last five years, Motherwell have finished ninth, fifth, eleventh, second, and second.

While the years of European qualifiers are not that far off, the results at Fir Park have not been as successful lately, including a relegation fright in 2015 when they finished in the relegation playoff spot and had to beat Rangers to keep their Premiership status.

However, this year has started off much differently for Motherwell. While a second place finish similar to the years Stuart McCall led the club might be a bit too much to ask, the Steelmen sit in fifth place in the SPFL Premiership as of writing and have a League Cup final to look forward to. A top six finish would seem to be the expectation now this season for Motherwell. While a good spot in the table is always nice, we know that sometimes the table lies to us and we need to look deeper into the corresponding numbers behind a team’s performance.

There is good news when we look at the underlying numbers for Motherwell thus far, we see the stats match their good start. Motherwell have an xG of 13.45 and xG against of 9.30 for a xG difference of 4.15, which is 5th best in the league through 11 matches. These underlying numbers suggest that if the Steelmen can continue that type of performance, they can not only hope for a top six position in the table, but also start to possibly dream about a European adventure again.

It has taken a few years for it to happen, but Louis Moult has finally become a household name among football fans in Scotland. For TheTwoPointOne towards the beginning of this season, I wrote about Moult’s great season last year, but Motherwell needing to find some help on the attack after losing partner Scott McDonald this offseason. Last season, Moult helped carry Motherewell, putting up 15 goals and an xG of 10.74 or 0.35 per 90. This year he is back to putting up good numbers again this season, with 5 goals (3 non-penalty goals) and a non-penalty xG of 3.63, which is 5th in the league.

Moult seems to be in good form again this season, but he is getting some help from his teammates and that seems to be making all the difference for Motherwell. Before the season started, there were questions who would be taking McDonald’s place as the other Motherwell striker, but Ryan Bowman has stepped up to that role in the first part of the season.

Bowman has matched Moult’s 3 non-penalty goals, with a xG of 2.24 and 0.26 per 90 thus far. While Moult gets lots of shots, ranking 2nd in the league in shots overall and 3rd in shots per 90, Bowman has been able to get good quality shots despite not having the same quantity of shots as Moult, averaging 0.19 xG per shot, which is 7th best in the SPFL, and 66.67% of his shots occur in the danger zone. Will Bowman be able to continue to keep scoring off of such good quality shots as defenses in the league realize they need to account for him? Motherwell’s success may hinge largely on it.

Both Moult and Bowman have surely enjoyed the play of young Chris Cadden on the wing for Motherwell. Cadden just recently received a well deserved call up to the Scotland U21 squad (and I contest perhaps should have been called up to the main squad) and has been impressive so far this season. He has 21 key passes so far (2.1 per 90) and a xA of 3.06 (0.2 per 90), which are both 3rd in the league this season. Compare this to the Motherwell squad last season, where no one at Fir Park finished among the top 20 in the SPFL in xA or key passes.

Cadden has only 1 assist this season, which might hint his teammates have let him down a bit, but his passing creativity is clear to see in the numbers and on the pitch. Not only are his key pass and xA numbers impressive, Cadden also has an xSA (expected secondary assist) of 1.11, which is 19th in the league. Cadden has been vital to Motherwell’s potent attack this season and the Steelmen will be relying on him to continue this the remainder of the season.

While the likes of Ryan Bowman and Chris Cadden have helped Louis Moult and Motherwell put out a strong attack on the Fir Park pitch, last season the club actually had a decent attack as well. In 2016, the ‘Well had the 5th highest xG at 56.09. What was not decent for them was their defense, ranking dead last in the SPFL in xG conceded at 74.34.

This year has been a much different story for the Motherwell defense though. Through 11 matches, the club has the second lowest xG against in the SPFL at 9.30. Only Celtic has allowed a lower xG against thus far, as in the team that has not lost in 62 domestic matches, so pretty impressive company. If we look at the number of Key Entries allowed, or any ball that is played beyond the 18 yard line by the opposition while defending, Motherwell has allowed 222 so far, with only Celtic, Hibs, Aberdeen, and Rangers allowing less. Comparing the key entries against to xG against in the SPFL this season, we see a decent relationship, so this number will be interesting to keep track of as the season unfolds.

With such poor numbers last season, Motherwell clearly had to make a change in the back. Enter Cedric Kipre, Charles Dunne, and Peter Hartley. Stephen Robinson has deployed these 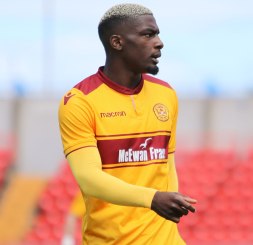 three either in a back three or part of a back five in recent matches and the results speak for themselves. Both Kipre and Dunne were brought to the club on free transfers, while Hartley was brought on loan from Blackpool, though his contract expires in May of 2018. Dunne and Kipre are younger players at 24 and 20 respectively, while Hartley has more experience at age 29. These additions have turned Motherwell from the worst defense last season to one of the best this season. Furthermore, they show that SPFL teams can help turn around part of their team with some shrewd signings.

Last season, Motherwell heavily relied on Louis Moult. Their defense was a shambles and besides Scott McDonald, the attacking burden fell mostly on Moult. But so far this year, it has been much more of a team effort at Fir Park. The club no longer has to rely on Moult to win. If they can continue to get these same types of contributions from Bowman, Cadden, Kipre, Dunne, and Hartley, a top six finish should be the minimum expectation for Motherwell.