The image here is not one of those ink-blot pictures that psychiatrists show you. Rather, it is 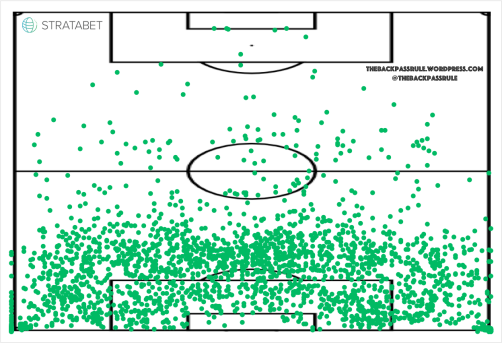 showing where the passer was located for every shot in the SPFL Premiership through February 25th. 2976 passes and 2976 shots (and each one of them mattered damn it, despite what some Times writer in England may think). I previously discussed what we could learn about individual players in the SPFL by their passing thanks to the data that Strata provided me. With that data we got Expected Assists and confirmed Scott Sinclair’s great season while learning how important Don Cowie and James Tavernier are to their clubs attack. Now we will see what we can glean from this same data on a macro level league wide looking at Key Passes, or every pass that has lead to a shot in the SPFL.

Before heading into the secret world of the private sector, The Rangers Report did some great work looking where passes came from and why that mattered. The Report would track the starting location of each pass that lead to a shot for Rangers, also known as a Key Pass and then placed them into numerical zones on the pitch (based on the methods of Claude Moeller Henriksen). However, since the fine folks at Stratabet have provided me all of locations of passers for these 2,900+ shots, I don’t have to spend hours tediously tracking these locations. With this data and using the same zones Rangers Report came up with, I thought it would be interesting to see just what passing locations lead to the most success in the SPFL Premiership this year.

Looking at the data, it becomes clear that the closer to the goal line and more central you are when you make your pass the higher the chance is that your teammate will score on their subsequent shot. We see passes from zone 22, or the 6 yard box, lead to goal 57% of the time. Zones 17 and 19 lead to goals over 23% of the time, with a left zone 17 pass

leading to a goal nearly 30% of the time. If you make a pass anywhere outside the box, your team is nearly 10% less likely to score than inside the box this season.

Of course, if exploring expected goals and goal conversion rates this year has taught us anything, it is that sometimes we can make a great pass and the striker will inexplicably miss. There has been numerous work discussing that shots in the “danger zone”, or shots in the 18 yard box between the goal posts, have the highest probability for going in. Those are the shots you want your team taking. Therefore, you would also want your team making the passes that would most lead to those shots.

danger zone shots. Regardless of finishing, making a pass within 18 yards of the goal is the best way to get a good shot for your team in the SPFL.

So most would agree that these numbers would suggest the death of “route one” football. If you want to be among the goals, your final key pass will need to be in and around the box more often than not. Since we have all of this passing data, we can see which teams are taking the most key passes from farther out(~30 yards or farther). The clubs who take the most passes outside the box would probably be on the bottom of the table right? Well, as we see Celtic with the most key passes from 18 yards out, but that is due to the fact that Celtic has the most shots by a wide margin in the league and thus has the most key passes in all of the various passing zones, not just from long distance.

This data has lots of possibilities. You can narrow it down to the team level to see where teams are most passing to lead to goals and shots. You can compare multiple clubs styles. You can do all of this with individual players. A club with this data and the right interpretation can get a leg up on a club who does not in the SPFL.

View all posts by Matt