Hi Hibs and Ross County fans. Let us get this out of the way right now. I hope Jason

Cummings and Liam Boyce stay in Scotland. I really enjoy watching them play, think they are great players, and think it is great they are at both of your respective clubs.

Both are leading the SPFL Premiership and Championship in goals and expected goals. When looking at both players’ impressive stats thus far in the season, I started thinking about how long they would be in Edinburgh and Dingwall. More over, I was a bit perplexed they were still at these clubs at largely successful campaigns last year. This made me recall an interaction I had on twitter with a Birmingham City fan.

Rightly or wrongly, those down south think there is a risk in purchasing talent from the SPFL. While there are plenty of examples of players who have succeeded in England, people (and likely clubs) will think of Andrew Shinnie (who has been good at Hibs this year), David Goodwillie, Aidan McGeady, and others who did not fare as well down south as they did in Scotland.

Strikers like Liam Boyce and Jason Cummings are clearly among the best strikers in their respective divisions. Along with their hot goal scoring form to start the season from both,
both have the best-expected goal totals in the SPFL Premiership and Championship respectively. As we have discussed, expected goals is a better indicator of future success than goals are. Both have taken the highest number of shots and shots on target in their division. Both seem to have stats to suggest they could continue their form at a higher level. 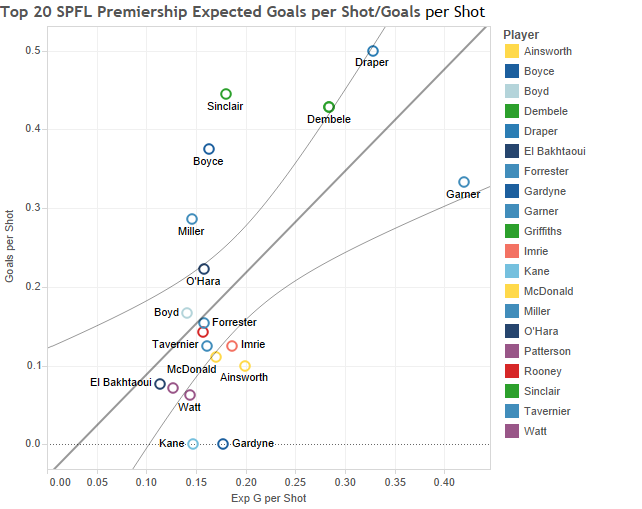 Now, this is not to say that there haven’t been bids for either Boyce or Cummings. Hibs have reportedly turned down a seven-figure bid for Cummings. Clearly any bid for either 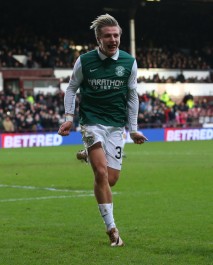 has not met either Hibs or Ross County’s valuation of their star striker. Both have recently signed contract extensions, neither club needs to sell anytime soon (and one would hope County wouldn’t continue the recent trend of giving players other clubs want for free).

Hibernian and Ross County have lofty goals this season. Hibs is looking (and honestly needs) to win promotion back to the SPFL Premiership. Ross County is looking to venture into uncharted territory with back to back top 6 SPFL Premiership finishes. Both are the holders of the Scottish Cup and League Cup respectively. Much of their success this season will come down to the performance and health of Cummings and Boyce.

Yet, if someone comes in with a bid for either that is above Hibs or County’s valuation, could we fault them for accepting? Hibs, one of the biggest clubs in Scotland, are now in their second season in Scotland’s second division with second division revenues. County, despite a top 6 finish and League Cup win, is one of the smallest clubs in the top flight and has only been in the top flight since 2012. Financially, a £2-4 million bid would be tough for either club to turn down.

I do think that both clubs would be wise to not let past failures from players hold them hostage when or if they sell Liam Boyce and Jason Cummings. These players have shown consistency in numerous metrics over multiple seasons now and have the tools to succeed anywhere they go.

Perhaps, Scottish clubs should be looking to sell elsewhere besides the English Championship and EPL. However, if that’s where Boyce and Cummings end up, can they be the players to change the minds of those in England about the quality of player in Scotland? That is, quite literally, the million pound question.

(Peter Lawwell, if you’re reading this, both would be great additions to Celtic!)